Home > Telling tales > Event in focus > Creatures of the Bay 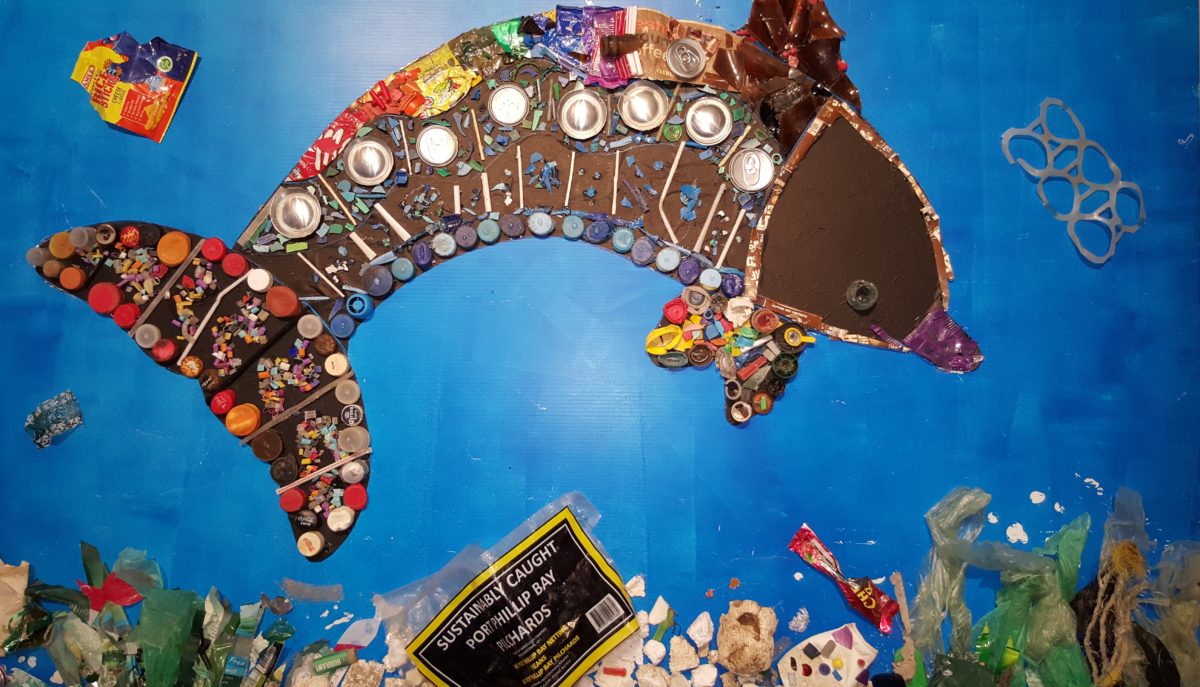 If action speaks louder than words then the Creatures of the Bay Exhibition at Gasworks Arts Park will help save the creatures of Port Phillip Bay from the devastating effects of plastic.

A collaboration between five schools, a community health centre, a church, a council and three community groups have created a pathway for environmental change in the tradition of true grassroots community action.

Students have collected single-use plastic items from local beaches and the surrounding streets of Port Phillip to create sculptures that represent the marine animals affected by plastic litter pollution.

The striking, colourful images of the exhibition create a sense of hope from what can sometimes feel like an overwhelming environmental problem.

The joyful image of a bright blue Bottlenose Dolphin —literally made out of bottles and bottle tops—captures the spirit of the project. The ‘Burrunan Dolphin’ was created from 2000 pieces of rubbish collected and sorted by Grade 6 students at Albert Park Primary School under the guidance of teacher Rachel Lehrner.

Commitment to the cause

The project has been created and lead by a band of committed volunteers including David Sinclair from Port Melbourne Icebergs and 3207 Beach Patrol with the support of SHIP (Social Health and Inclusion Port) auspiced by Star Health and the Port Phillip Community Strengthening Program through the City of Port Phillip, Port Phillip Eco Centre and SouthPort Uniting Church.

SouthPort Uniting Church hosted a community event on Saturday May 27 to extend the reach of the project to the broader community with an art making experience from the plastic litter. Port Melbourne resident Chris created a plastic penguin when he participated in the Skillsfest Creatures of the Bay workshop which involved making a swarm of jellyfish with artist Carolyn Cardinet, sewing reusable ‘boomerang bags’ and learning about ways to go plastic-free in everyday life.

Support for the exhibition and environmental education project is spreading with a visit from some enthusiastic four-year-olds at the local Bubup Womindjeka Family and Children’s Centre kindergarten program.

The Creatures of the Bay Exhibition was officially opened by Port Phillip Mayor Bernadene Voss —who participated in a ‘ban the bag’ demonstration with student representatives from the five participating schools on Saturday June 17.

Coinciding with the exhibition, a ‘ban the bag’ petition has been created by the Channel 10 television program The Project and Clean Up Australia to apply public support for legislative measures in Victoria, NSW and WA to create a nation-wide ban.

Running in conjunction with the Creatures of the Bay Exhibition, 10 Bay Street (Port Melbourne) businesses have agreed to replace plastic straws with paper straws as part of a trial for the last straw campaign.

Already a paper straw has found its way to the beach which was collected by the 3207 rubbish collecting volunteers—so it is a kind of victory. The biodegradable product is much faster to break down however wouldn’t it be great if we could protect our precious creatures of the bay without any additional rubbish flowing into the big blue.

The Creatures of the Bay Exhibition is showing until Sunday July 2 at Gasworks Arts Park, 21 Graham Street Albert Park, open daily from 9.30am to 4pm.