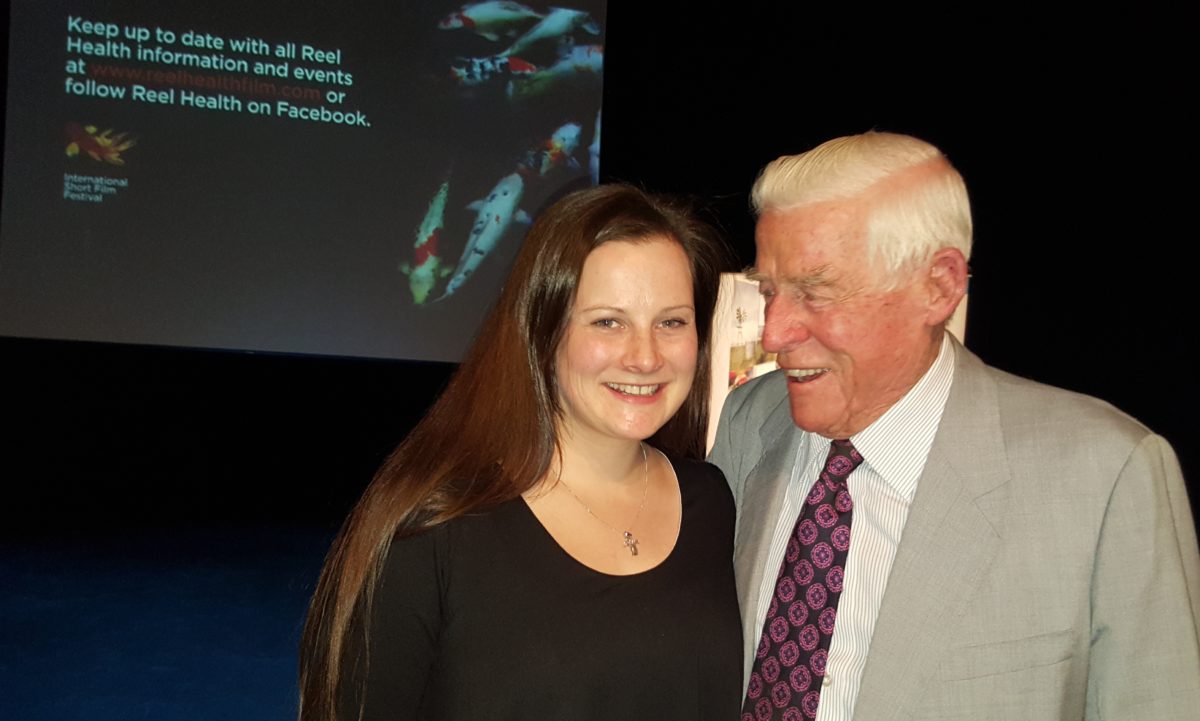 Corinne Maunder with 'My Great Uncle Peter' at launch of Barwon tour of the Reel Health International Short Film Festival.

Usually in a health context ‘viral’ is an unwanted small infectious agent but the viral spread of preventative health messages in the short film ‘My Great Uncle Peter’ has provided a different spin.

In the time it took film maker Corinne Maunder to travel on an international flight, her documentary-style short film had taken off on its own orbit with 14,000 views. Messages of support included a campaign; ‘Peter for Prime minister.’

The Reel Health International Short Film Festival is an initiative of Monash Health to provide an opportunity for the community to talk about health and the health care industry.

The festival is touring the Barwon region in August with a selection of 12 short film vignettes handling a myriad of emotions and experiences which make up the human experience of health and wellbeing.

Relationships, the importance of work in staying active in senior years, adapting to technology, loss, the deep bond of love between a grandmother and her adult grandson, a personal reflection on the tenuous boundary of sanity and insanity, the remarkable story of a woman’s courage in facing the challenges of disability left by a childhood illness, loss, frustration and love.

Art is important. It touches the soul and inspires the human spirit according to film maker Corinne.

It is the third time Corinne has entered the film festival, beginning with a film about her Nan’s experience of Alzheimers, and for the latest film has covered the story of the sibling, her Great Uncle Peter.

According to Corinne, the festival provides a place to challenge the traditional ‘medical’ model of care to a preferred model of wellness and prevention celebrating life.

Corinne shares the inspiring story of ‘My Great Uncle Peter’ as she follows a day in the life of the 93-year-old truck driver.

Uncle Peter collects carrots and bok choy from a farm in Heatherton and delivers philosophical gems and straight forward advice on how to live a healthy life —along the journey  to the supermarket logistics centre at Waverly in Melbourne’s Eastern suburbs by 5.30 am each morning.

‘If you sit on the armchair you are gone.’

Peter shares his story of leaving school at 14 and becoming a widower after 64 years of marriage. His advice is simple; Eat well. Sleep well. Enjoy what you are doing.

He has been hauling vegetables along the same route for 19 years —after a three year break when he originally retired from truck driving.

In more than 70 years on the road, Peter is appropriately proud that he has never received a speeding ticket.

Check out the inspiring story of ‘Great Uncle Peter’ as the film tours the Barwon Region during August with 11 other short films.

For more information about the Geelong regional tour contact Peter Kelly at peter.kelly@barwonhealth.org.au.